The Advantages of 330A Automatic Band Sawing Machine

1. The sawing speed of the 330A band saw can be adjusted according to the feed speed, and the two speeds form a closed
Ring vector control, on the one hand, improves the sawing efficiency of the band sawing machine; on the other hand, the life of the band saw blade also increases with the promotion;

2. The 330A band sawing machine can set the pulse chip breaking device according to the material properties to break chips at a reasonable frequency to avoid.Hard friction occurs with the point press to avoid excessive pressure on the back of the saw and stop working;

6. The clamping device of the 330A band saw can accurately locate the workpiece size and sawing length to avoid hard friction. 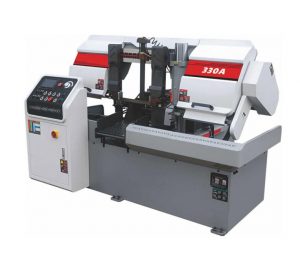