(2) The sharpening method of turning tool and clamping internal thread turning tool is basically the same as that of external thread turning tool, but when sharpening the sharp corner of the tool, special attention should be paid to its bisector must be perpendicular to the tool shank, otherwise the inside of the car must be vertical. When threading, there will be the phenomenon that the tool shank hits the inner hole of the workpiece, and the width of the tool tip should meet the requirements, generally o lp. When installing the tool, it is necessary to align the tool tip strictly according to the template, otherwise there will be a reverse tooth phenomenon after turning the pipe thread lathe. After the turning tool is installed, the saddle should be shaken in the inner hole to the end point to check whether there will be a collision.

2. Determination of the diameter of the inner thread of the triangle

When turning internal threads on a pipe thread lathe, drilling or reaming is first required. The size of the hole diameter can generally be calculated by the following formula:

In the formula, the nominal diameter of the thread (mm):

1) Before turning the internal thread, first turn the inner hole, plane and chamfer of the workpiece.

3) The feed cutting method of the pipe thread lathe is the same as that of the external thread. When the pitch is less than 15 or the straight-forward method is used for cast iron threads, the left-right cutting method is used when the pitch is greater than 2mm. In order to improve the deformation of the shank under the cutting force, most of its cutting allowance should be cut off in the direction of the tailstock first, then the other side is turned, and finally the major diameter of the thread is cleaned. When the thread is inside the car, visual inspection is difficult. Generally, the left and right cutting method is performed according to the observation of chip removal, and the surface roughness of the thread is judged.

4. Pipe thread lathe with internal thread without through hole or stepped hole

1) When turning the undercut groove, its diameter should be larger than the major diameter of the thread, the width of the groove should be 2 to 3 pitches, and it should be cut flat with the step surface.

3) According to the thread length plus 1/2 of the groove width, make a mark on the tool shank, which is used for retracting the tool and opening and closing the nut.

4) During turning, the retraction of the middle slide handle and the opening and closing of the nut (or reversing) should be fast, accurate and coordinated to ensure that the tool tip is retracted into the groove. 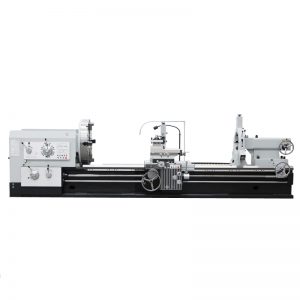