The origin of the name of the bull’s head planer

The bullhead planer is a planer with a ram carrying a planer to make a linear reciprocating motion. It is named because the blade holder at the front of the ram looks like a bullhead.
Bullhead planer is mainly used for planing planes, forming surfaces and grooves on small and medium-sized workpieces in single-piece and small-batch production.
Most of the main movements of small and medium-sized bullhead planers are driven by a crank-rocker mechanism, so the moving speed of the ram is uneven.
Large-scale bullhead planers mostly use hydraulic transmission, and the ram basically moves at a constant speed.
The return stroke speed of the ram is greater than the working stroke speed.
The productivity of the bullhead planer is low due to the use of a single-edged planer and no cutting during the return stroke of the ram.
The main parameter of the machine tool is the planing length.

The profiling machine is to add a profiling mechanism to the ordinary profiling machine, which is used to process the shaped surface, such as the turbine blade. The ram and sliding seat of the mobile bullhead planer can also be moved on the bed (horizontal) or column (vertical), which is suitable for planing the local plane of super large workpieces.
The cutting tool that has moved back and forth is used to cut the workpiece fixed on the working platform of the machine tool, which is generally used to process smaller workpieces. The tool rest 1 of the machine tool resembles a bull’s head, hence the name bull’s head planer.

Bullhead planer can process various flat surfaces, and some curved surfaces can be processed under some special devices.
The bullhead planer is mainly used to process relatively short planes, and the planer is used when the plane size is relatively large.
It is rarely seen in general factories. Because it has a relatively low efficiency in processing planes, milling machines and other machine tools are used to process planes when the batch is relatively large. However, the processing efficiency of long and narrow planers is higher than that of planers. 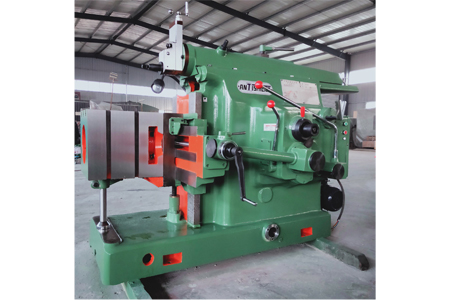