Brands and selection of CNC tools PCBN and PCD

The effect of CBN grain size on the cutting performance of PCBN tool materials, and the wear resistance of PCBN tools is related to the size of CBN grains in the sintered body. The size of the CBN grains affects the strength of the tool. The fine grains can increase the grain boundary area of ​​the grains, improve the sintering strength and the ability to resist crack growth, thereby increasing the wear resistance of PCBN tools. When the particle size is increased by 1 time, the tool life will be reduced by 30% to 50%. Figure 2-28 shows the tool wear curves of three grain sizes when cutting hardened steel. It can be seen from Figure 2-39 that the smaller the grain, the stronger the wear resistance. This is due to the smaller the grain. The higher the strength of the composite sheet, the higher the tool life.

(1) Rake angle: The generally recommended range is 0°～-10°, usually 0° rake angle is mostly used, and there are also negative or positive rake angles. As for the size of the negative rake angle, it depends on the specific conditions of the processed parts.

(2) Relief angle: generally choose a smaller one, choose within the range of 6°～10° to ensure that the wedge angle of the cutting part of the tool is large enough.

(3) Blade inclination: If there is no special requirement, it is usually 0°, and sometimes it can be a negative value to ensure that the cutting edge has a better stress state when cutting.

(4) Tool tip angle: Except for special requirements, generally it should not be less than 90°, and the tool tip should be ground into an arc of about rε=0.4～1.2mm to ensure that the tool tip has sufficient strength.

2. Use of cutting fluid Although the PCBN composite sheet can withstand a cutting temperature of 1200 to 1300°C, the welding part between the PCBN composite sheet and the cutter body can only withstand a temperature of about 800°C (in the case of brazing). At one point, it is best to use cutting fluid for cooling. However, at about 1000°C, CBN and water will hydrolyze, causing severe wear of PCBN tools. Therefore, it is not advisable to use water or other oxidizing cutting fluids to avoid aggravating oxidative wear. The most suitable cutting fluid is cutting oil with extreme pressure.

3.The particularity of the impact of workpiece hardness on PCBN tool life When cutting hardened steels with different hardnesses, as the hardness of the processed material increases, PCBN tool life does not decrease monotonously, but the tool life is the lowest at 40HRC. When the workpiece material has a high hardness After this hardness, PCBN tool life increases instead. When the hardness is lower than this hardness, PCBN tool life is lower than that of cemented carbide tools. This is mainly due to the small hardness loss of PCBN material at high temperature, while the hardness loss of the processed material is relatively large. The characteristic of PCBN is very suitable for processing high-hardness materials. The most representative one is the technology of turning instead of grinding in hard cutting to obtain the surface quality that can only be obtained by grinding in the past. At present, this cutting technology called “Red Crescent” (Red Crescent) is being researched and promoted.

5. Points for reference selection of PCBN

2) The optimal feed amount, because PCBN cutters generally have negative chamfering, therefore, when possible, the choice of feed amount should be greater than the chamfering width. In addition, PCBN tools are mainly used for finishing, and the amount of back-grabbing is generally small. In order to produce the metal softening effect, the feed amount should be relatively large. To make the PCBN tool produce a metal softening effect when cutting, it is necessary to make the cutting area large enough. However, the feed rate of PCBN tool should generally not be greater than 0.2mm/r.

The choice of cutting amount should pay attention to the comprehensive influence between the three. Although the PCBN composite sheet is resistant to high temperature, the welding strength of the composite sheet and other parts often restricts the improvement of cutting efficiency. For example, the welding of the composite sheet and the cutter body is often due to cutting Excessive temperature will cause desoldering, causing falling off or hitting a knife, and damaging the quality of the processed surface.

When installing PCBN tools, the tool tip should be aligned accurately, the cantilever should be small, and the extension length of the tool head should be short, generally less than 25-30mm. Careful operation should be performed when setting the tool to avoid collisions; it is not suitable for processing on waste surfaces. The workpiece flash is best to be chamfered; the workpiece should be clamped well, and the factors that cause vibration during cutting should be eliminated as much as possible, such as adding a center frame when processing a slender shaft. 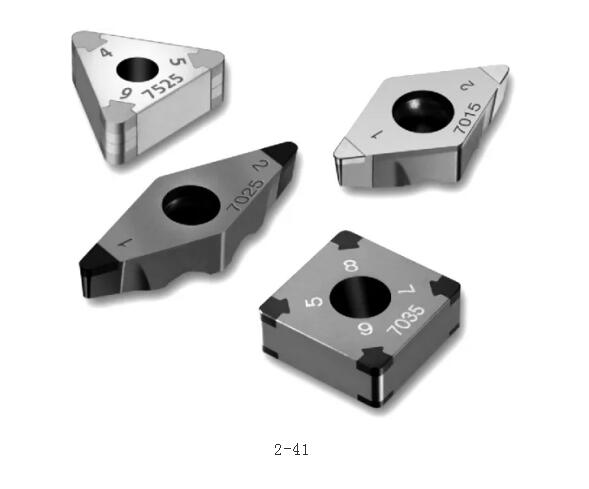 CB7015 is used for continuous to light interrupted cutting;

CB7025 is used for light to medium interrupted cutting;

CB7035 is used for medium to heavy intermittent cutting;

The thermal stability of diamond is relatively poor, and its hardness will be lost when the cutting temperature reaches 800°C. Diamond tools are not suitable for processing steel materials, because diamond has a strong chemical affinity with iron. At high temperatures, iron atoms easily interact with carbon atoms to convert them into graphite structures, and the tools are extremely easy to damage. PCD tools are limited to processing non-ferrous materials, such as high silicon aluminum, metal matrix composite materials (MMC) and carbon fiber reinforced plastics (CFRP). PCD using a large amount of cutting fluid can also be used for super finishing of titanium materials. Using single crystal diamond tools, mirror processing can be achieved on ultra-precision lathes. Single crystal diamond tools are currently the most important tool in the field of ultra-precision machining. The cutting edge can be sharpened. The radius of the cutting edge can reach 20~30nm. The surface roughness of the processed workpiece is small and the tool life is very long. , Sharpening can be used for several hours at a time. At present, single crystal diamond tools are widely used for processing computer disk substrates, video recorder drums, laser mirrors, various astronomical telescopes, microscopes, and optical instruments.