1.Open the fuel tank cover in front of the sawing machine, and add 32#, (46# in summer) wear-resistant hydraulic oil, the oil level is limited to the high filter screen.

2. Add water, the upper part of the suction port of the water pump is limited after the water level reaches the bed.

3. Three-phase power supply of the circuit breaker at the bottom right after turning on the sawing machine.

4. Close the circuit breaker switch, turn on the main stop switch, and start the operation of the oil pump, turn the speed control switch counterclockwise to the slowest stop, and open the up switch. Let the beam of the sawing machine rise to the highest position, and then open the operation switch, the saw belt wheel starts to roll, rolling counterclockwise is forward rotation. After the test run is over, turn off the main stop switch.

7. Adjust the left guide arm according to the width of the workpiece (the right guide arm cannot be moved, it has been adjusted before leaving the factory). The best distance between the guide head and the workpiece is 20mm.

9. Turn on the operation switch, and after the saw wheel rolls, turn the speed control switch to adjust the feed speed of the falling saw (the new saw blade should not be too fast, and the falling saw speed will be added after a period of running-in). 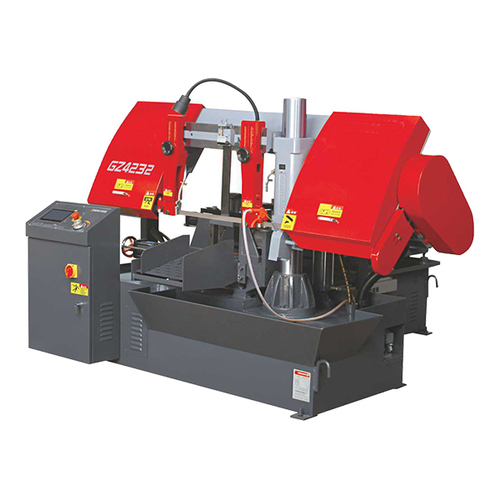