How to improve the efficiency of CNC lathe cutting and grooving in processing?

Installation and commissioning of sawing machine

How to solve the crawling and vibration problems of machine tools? 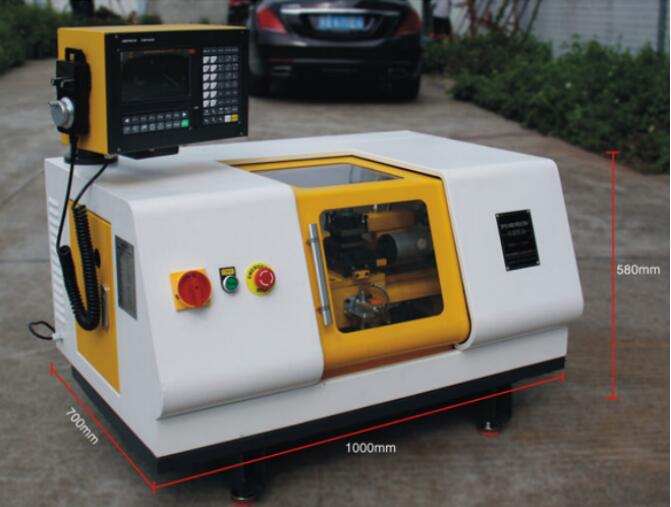 1. Analyze the location where the fault occurred

Crawl and vibration faults usually need to find the problem in the mechanical parts and the feed servo system. Because the crawling phenomenon of the CNC machine tool feed system at low speeds often depends on the characteristics of the mechanical transmission components, the vibration phenomenon at high speeds is usually related to the pre-tightening force of the motion pair in the feed transmission chain.

In addition, crawling and vibration problems are closely related to the feed speed, so the speed loop and system parameters of the feed servo system should also be analyzed.

Although the guide rail pairs of CNC machine tools widely use rolling guides, hydrostatic guides or plastic guides, if the adjustment is not good, it will still cause crawling or vibration. The static pressure guide should focus on checking whether the static pressure is established; the plastic guide should be checked for impurities or foreign matter obstructing the movement of the guide pair, and the rolling guide should be checked for good preload.

Secondly, check the feed drive chain. In the feed system, between the servo drive device and the moving parts must pass through a transmission chain composed of gears, screw nut pairs or other transmission pairs. Effectively improve the torsion and tension and compression stiffness of this transmission chain, which is very beneficial for improving the motion accuracy and eliminating crawling.

One of the reasons for the creeping of moving parts is often caused by unsatisfactory pre-tensioning or pre-tensioning of bearings, screw nut pairs and the screw itself. Too long drive chain, small drive shaft diameter, insufficient rigidity of support and support seat are also non-negligible factors that cause crawling. Therefore, whether there are defects in these aspects should also be considered during inspection.

In addition, poor mechanical system connection, such as damage to the coupling, may also cause vibration and crawling of the machine tool.

3. Inspection and elimination of faults in the feed servo system
If the cause of crawling and vibration is in the feed servo system, it is necessary to check each relevant link in the servo system separately. Check whether the speed regulator, servo motor or tachogenerator, system interpolation accuracy, system gain, system parameter settings related to position control are wrong, whether the short-circuit bar setting on the speed control unit is correct, and the gain potentiometer is adjusted correctly. No deviation and whether the circuit of the speed control unit is in good condition, etc., shall be checked and classified one by one.

(3) Motor inspection
When the vibration frequency of the machine tool is in a certain ratio to the motor speed, first check whether the motor is faulty, check its carbon brushes, commutator surface conditions, and check the lubrication of the ball bearings.
In addition, defective motor armature coils can also cause system vibration.

This situation can be confirmed by measuring the no-load current of the motor. If the no-load current increases in proportion to the speed, it means that there is a short circuit inside the motor. In the event of this failure, the commutator should be cleaned first, and the brush should be checked before measuring and confirming it. If the fault still exists, there may be a short circuit between the turns of the coil, and the motor should be repaired. If there is no problem, check the tachogenerator.

(4) Detection of pulse encoder or tachogenerator

For the improper pulse encoder or tachogenerator, the measurement and inspection can be carried out according to the following methods. First, disconnect the position loop and speed loop, rotate the manual motor, and observe the voltage of the F/V converter on the printed circuit board of the speed control unit. If there is a sudden drop in voltage, the feedback component is defective.

A closed-loop system may also cause system oscillation due to unreasonable parameter settings. The best way to eliminate oscillation is to reduce the magnification. Adjust RV1 in the FUNAC system and turn it counterclockwise. It can be seen that it will get better immediately. However, because the range of the RV1 adjustment potentiometer is relatively small, sometimes it cannot be adjusted, and only the shorting bar can be changed, that is, the feedback is cut off. The resistance value reduces the magnification of the entire regulator.

For fixed interference, check the waveforms of the F/V converter, current detection terminal and synchronization terminal, check whether there is interference, and take corresponding measures. For accidental interference, only through effective shielding, reliable grounding and other measures to avoid as much as possible.

After adopting these methods, the vibration cannot be completely eliminated, or even ineffective. It is necessary to consider replacing or thoroughly checking the waveforms of various parts after replacing the speed regulator board.