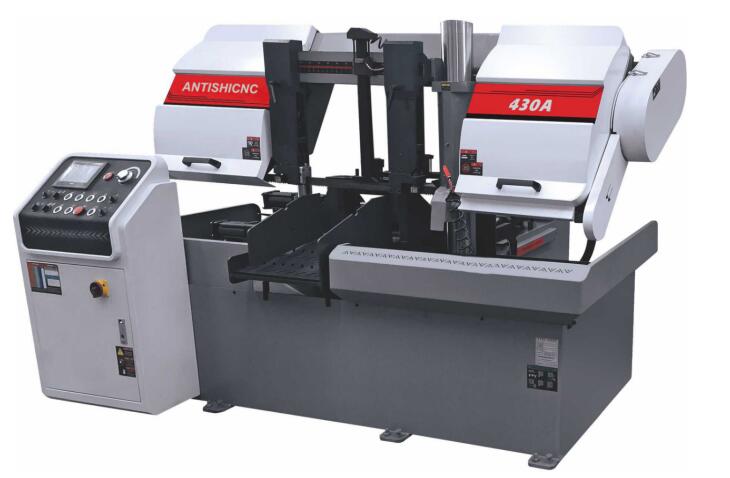 Before starting the lubrication system, oil must be added according to the requirements of the lubrication parts of the machine tool (wire brush shaft, worm gear box, driving bearing seat, worm bearing, upper and lower shafts of lifting oil cylinder, clamping screw rod on the sliding surface of movable vice). The worm gear and worm in the worm gear box are lubricated with No. 30 oil bath and injected by the oil plug hole on the upper part of the worm gear box. The box surface is equipped with an oil standard. When the saw beam is at the lowest position, the oil level should be between the upper and lower limits of the oil standard. The oil shall be changed after one month of trial use, and then every 3-6 months. An oil drain plug is set at the lower part of the worm gear box.

The saw blade drives the motor installed on the worm gear box, drives the worm and worm gear in the worm gear box through the belt pulley and triangular tape, drives the driving wheel to rotate, and then drives the saw blade around the active / passive rim for cutting rotation. The feed movement of saw blade is a hydraulic circulation system composed of lifting oil cylinder and speed regulating valve, which controls the falling speed of saw beam, so as to control the feed (stepless speed regulation) movement of saw blade. The saw brush rotates at the place where the saw blade produces chips and rotates with the direction of the saw blade. The cooling pump supplies coolant for cleaning to remove the chips on the sawtooth. The coolant is in the coolant tank on the right side of the base, which is directly driven by the water pump to supply coolant.

Press the emergency stop (stop) button, rotate clockwise, the oil pump motor works, the gear pump works, the oil enters the pipeline through the filter screen, and adjust the overflow valve to make the system working pressure meet the requirements. Conversely, press the button inward and all motors stop working. When the workpiece is clamped, press the clamping button, the solenoid valve works, the hydraulic oil enters the left of the clamping cylinder, the hydraulic oil returns to the oil tank on the right, and the left clamp is clamped to the workpiece.

The analog input and output module of the system makes the monitoring of the sawing process of a wide range of significance. For example, as long as the feedback of saw blade deformation is increased, the sawing speed can be adjusted adaptively. By adding servo valve, the speed and position control of sawing process can be optimized. The management function of the system makes the management of materials and workpieces more convenient. The Chinese interface and real-time graphical status display of the system make the operation more friendly and intuitive.

If you want to know more about ANTS, please visit our official website.
Our website：http://www.antsmachine.com

If you have any other questions, please contact us directly by email.
Our eail: Contact@antsmachine.com