How to maintain lathe

The Shaper machine is designed for cutting flat and fomed surfaces on various kinds of small or medium sized workpiece. It can also be used to cut surfaces in special shape if equipped with a special vice or a dividing head and it is suitable for single piece and small batch production as well.

The main cutting motion of the machine is linear motion being converted from circular motion of gears by link bolck mechanism.With smooth transmission.

Short over run and less consume of power, the machine is easy to start and stop. If being provided with a tool lifter, the mechine table can obtain rapid motion in vertical and horizontal direction. The machine, with pleasing appearance and stable accuracy, can be oerated and maintained conveniently.

Introduction to the bull head planer
Most of the main movements of small and medium-sized head planers are driven by a crank rocker mechanism. Large-scale bullhead planers are mostly hydraulically driven, and the ram is basically moving at a constant speed. The return stroke speed of the ram is greater than the working stroke speed. The productivity of the head planer is lower due to the use of a single-edged planer and no cutting during ram return. The main parameter of the machine is the maximum planing length. The head planer mainly consists of a common head planer, a profiled head planer and a mobile head planer. The common head planer is operated by a ram with a planer for horizontal straight-line movement. The tool holder can be rotated by an angle in the vertical plane and can be fed manually. The workbench carries intermittent or vertical feed motion with the workpiece. Machining planes, grooves and dovetail surfaces. The profiling planer is to add a profiling mechanism to a conventional head planer for processing shaped surfaces such as turbine blades. The ram and slide of the mobile bullhead can also be moved on the bed (horizontal) or upright (vertical) for planing the partial plane of very large workpieces.

Its main five characteristics are:
1. The workbench of the head planer has a moving mechanism for lateral and lifting; it is used to plan the inclined plane, thereby expanding the scope of use.

2, the feed system of the planer adopts a cam mechanism and has 10 feeds. It is also very convenient to change the amount of the knife.

3. The bullhead planer is equipped with an overload safety mechanism in the cutter system. When the operation is inadvertent or affected by external force and the cutting overload, the knife slips on its own, and the non-destructive parts ensure the normal operation of the machine.

5, the bullhead planer is equipped with a clutch and brake parking mechanism, so when changing the speed, starting the machine and stopping, it is not necessary to cut off the power supply. The brake parking mechanism can make the inertial stroke of the ram when the clutch is disengaged is no more than 10 mm. 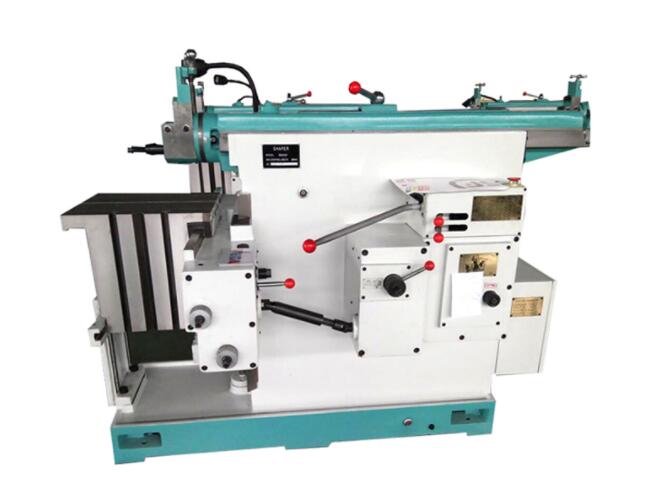