The metal band sawing machine consists of nine parts, including the frame, the main drive, the saw frame, the worktable, the cooling mechanism, the electrical system, the feeding system and the guiding system. The functions of these parts are described below:

1. Rack: It consists of base, left and right end pillars, side pillars, two guide rail brackets and peripheral guard plates. Left and right end pillars, side pillars, guide rail brackets, etc., are welded and fixed on the base to form a cuboid frame. The components are installed on the base, and the inner and outer workbenches are fixed at the top of the rack. The surface-processed steel rails are laid flat on the two guide rail brackets, which support and allow the saw frame to slide back and forth longitudinally, so as to realize fast-forward, work-forward, and fast-rewind to complete the cutting work.

There are guard plates inside and outside the frame, and the inner guard plate catches the iron filings and cooling water flowing down from the worktable, and flows into the chip groove.

2. Main drive: AC variable frequency stepless speed-regulating gear reducer is adopted, the active saw wheel is fixed on the main drive spindle and connected to the extension shaft of the gearbox, and the band saw blade connected to the saw wheel can be driven to obtain 1260M/min respectively. Cutting line speed.

4. Feeding mechanism: It is composed of AC variable frequency motor, control board, reduction box, electromagnetic clutch, bracket, ball screw and guide rail bracket. The saw frame and the roller mechanism are fixed into one with screws. The transmission chain controlled by the motor drives the rollers across the two guide rails, so that the saw frame can obtain the infinitely adjustable feeding speed, and the value can be displayed on the display screen.

6. Lifting and sliding table guiding mechanism: It mainly plays the role of guiding the saw band, and is distributed on both sides of the workpiece by the carbide “guide pressure blocks” that clamp the band saw blade. The lower guide block is fixed and can be fine-tuned horizontally as much as possible. The upper guide pressure block is mounted on a guide rod that can slide up and down along the guide seat. Loosen the screws on the guide arm plate, and adjust the “guide pressure block” so that the band saw blade is in a “perfect straight” state after tensioning. 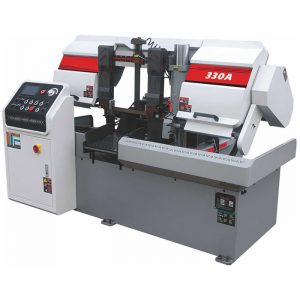