CNC band saws can save and reduce energy consumption and pollution emissions, and can play a certain role in improving work efficiency and maintaining economic growth. Because in the sawing process of the CNC band sawing machine, one person can control multiple machines at the same time, and the processing accuracy is greatly improved, and the scrap rate caused by human error is significantly reduced, thereby reducing labor intensity and saving labor, which not only brings customers Convenient, but also brings great economic benefits.

In addition, the CNC band saw can not only cut general metals, but also cut alloys, leather, rubber, nylon and other different materials. Different straight lines, waveforms, and angles can be customized, which greatly improves the cutting efficiency during use. . Therefore, the use of a CNC band saw for industrial sawing not only allows the operator to work easily, improve work efficiency, but also is safe and simple. The sawing machine can automatically realize the processes of feeding, measuring, sawing, sawing, clamping, etc., only by inputting the CNC program. , Bring great convenience to the sawing processing in the machinery industry.

System function of band sawing machine
1. Hydraulic transmission system: It is composed of pumps, valves, cylinders, oil tanks, pipelines and other auxiliary parts. The lifting of the saw beam and the clamping of the workpiece are completed through electrical control to meet the sawing needs of different materials.

2. Electrical control system: It is composed of electrical box, control box, junction box, travel switch, electromagnet, etc. It is used to control the various functions of the saw blade and make it work normally.

3. Lubrication system: The system seems simple, but in fact it is very important. Because the equipment is not lubricated, it is prone to mitre cuts, wear equipment, and reduce the service life of band saws and saw blades. 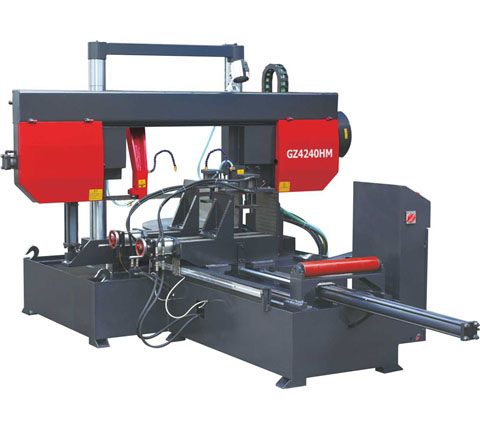