The angle band sawing machine is a commonly used cutting tool in the field of industrial processing, so various enterprise users have high requirements for its cutting accuracy. If the angle band sawing machine has poor accuracy during the sawing process, it may be the saw band of the guide frame. If the clamping surface is not perpendicular to the work surface, the saw belt should be installed at this time, and the perpendicularity between the side of the saw belt and the work surface should be checked with a square ruler. If necessary, loosen the fastening screws on the small bracket and adjust the accuracy with the top wire.

Angle band sawing machine is a commonly used sawing tool in sawing processing. When it is used, it is necessary to select the appropriate cutting speed and feed speed of the saw belt according to the size and material of the workpiece; and when the workpiece is placed in the vise, it must be Keep the surface distance on the saw belt workpiece at 80-100mm, and adjust the sawing angle, so as to ensure the smooth progress of the sawing process of the band saw. 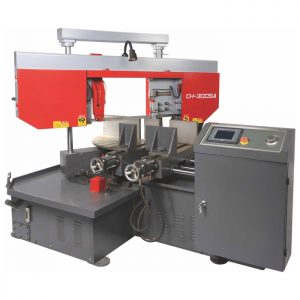